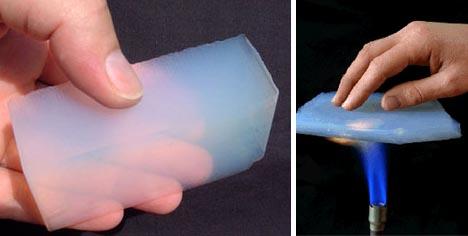 Despite its incredibly low density, aerogel is one of the most powerful materials on the planet. It can support thousands of times its own weight, block out intense heat, cold and sound – yet it is 1,000 times less dense than glass, nearly as transparent and is composed of 99.8% air. The lowest-density silica-based aerogels are even lighter than air.

A 2.5 kg brick is supported by a piece of aerogel weighing only 2 grams.

Despite its fragility in certain regards and its incredible lack of density, aerogel has amazing thermal, acoustical and electrical insulation properties as illustrated by the images here. A single one-pound block can also support half a ton of weight. NASA continues to find new space-based applications for this incredible material.

An aerogel window one inch thick has the effective insulative capacity of a ten-inch thick glass window system. While it is still expensive and has other limitations, this material – originally developed nearly a century ago but still undergoing experimentation – could prove to be one of the most influential materials of the 21st Century.

A flower is on a piece of aerogel which is suspended over a bunsen burner. Aerogel has excellent insulating properties, and the flower is protected from the flame.

Aside from its other capabilities, aerogel also has amazing absorbing abilities. Some speculate it could be the future solution to oil spills. It is also being tested as a possible slow-release drug deliver system for potential human patients.

Peter Tsou with a sample of aerogel at Jet Propulsion Laboratory, California Institute of Technology